The World Car Awards is the largest car awards programme in the world. Ninety-three international journalists vote annually for the world’s finest cars. This year’s crown has gone to the Volkswagen ID4.

Volkswagen ID4 is World Car of the Year 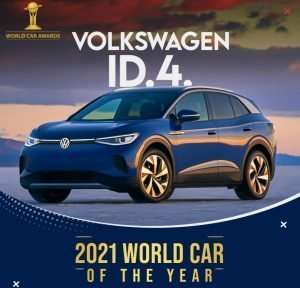 Volkswagen’s first pure EV for the global market is set to become the key driver of Volkswagen’s switch to electric power. The ID.4 is the fifth World Car of the Year winner for Volkswagen since the competition began.

The other Volkswagen World Car of the Year winners were:

Volkswagen CEO Ralf Brandstatter said: “We are pleased about the ID.4 being named World Car of the Year. It is amongst the most important car awards in the world.

Jaguar Land Rover chief Gerry McGovern accepted the award for the Land Rover Defender. It is an extremely successful reinvention of the Land Rover and was felt to be well-deserved.

The Honda e is made for the city, with a zero-emission EV powertrain. Judges felt this city car is the best urban car on sale and rewarded Honda’s bold innovation.

Porsche took its eighth World Performance Car win with the 911 – a remarkable run. The car’s performance, handling and heritage all helped it on its way to the prize.

Where Porsche defines performance, Mercedes-Benz defines luxury. Its top-line car, the S-Class, won the 2021 World Luxury Car title. Another positive step for the brand’s flagship, it embraces electrification and takes automotive indulgence to a new high.